Last night my colleague and I undertook our 4th annual trek to the Toronto Antiquarian Book Fair, an event which I very much look forward to every year. Several dozen rare book dealers converge upon the Art Gallery of Ontario, displaying many obscure and marvelous volumes. While I am very much a novice book collector, and enjoy more the thrill of finding a fine first edition in a thrift store bin than forking over several paychecks for a single collectors’ piece, I undoubtedly have the bibliophile gene. And so to attend this particular event, to peruse so many obscure and historic volumes, to stroke the tooled-leather bindings or turn the crisp vellum pages, and yes, to tempt my woefully-thin pocketbook, is an indulgence I will happily undertake again and again. 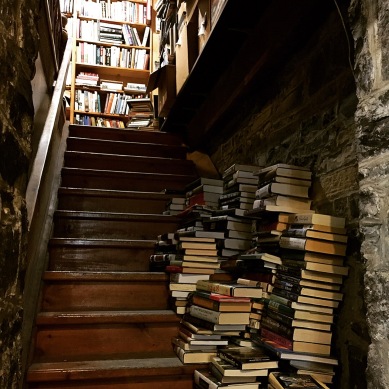 Alas, the fair happens only once a year, and life affords only so many opportunities to seek out others, or even to haunt my favorite used book shops. But there is another way to satiate one’s hunger for many a quaint and curious volume of forgotten lore, and that is, fittingly, by losing oneself in more books! There have been a number of examples that encompass all of the respect, reverence and wonder I experienced at the book fair last night, or for that matter when I walk into almost any properly musty used book store. These stories either use books as a primary vehicle for the action, or feature depictions of books and libraries that cannot help but capture the imagination of any bibliophile who parts their covers. So, if you too long to feel the comforting heft of a leather-bound volume of Shakspeare’s complete works (Edinburgh, 1892, and yes, that’s how they spelled it) but are unable to get your hands on one (or afford one, like me), then read on, and experience the next-best thing.

The Name Of The Rose by Umberto Eco

If there is one book that evokes all the history, mystique, reverence and danger of books, it is without a doubt The Name Of The Rose. Set in medieval Italy, the story takes place in a Benedictine monastery renowned for its vast library. A string of deaths among the monks stirs fears of a diabolical cause, but the evidence, uncovered by the wise and logical Brother William of Baskerville, points instead to the forbidden library and a cursed book of forbidden knowledge. Eco balances well-researched historical accuracy and a mystery plot worthy of Sherlock Holmes with philosophical insights better suited to academia. If you find his prose too dense for your taste, the film by the same name is of course an option, but really, if you’re a bibliophile like me, reading the book is the only way to go.

The Rule Of Four by Ian Caldwell and Dustin Thomason 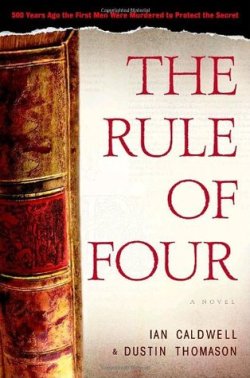 Tom and Paul are ivy-league students at Princeton who have devoted their studies to unraveling the mysteries of a 15th century Italian manuscript. Written in an invented language replete with symbology and mysticism, the Hypnerotomachia Poliphili has confounded scholars for ages, and is poised to thwart its latest codebreakers as well, until a clue is uncovered in the form of a presumed-lost diary. But when a colleague is found murdered not long after, Tom and Paul learn that the two events – the diary and the murder – were no coincidence. The secrets of the Hypnerotomachia Poliphili have not lain unguarded through the centuries, and those who draw close to uncovering them find themselves in mortal danger. Yet their only course is to delve deeper, and solve the puzzle before it is too late. 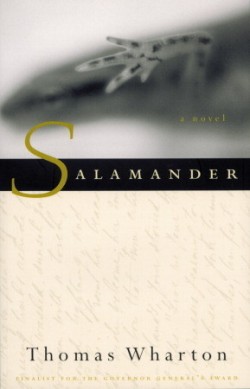 Nicholas Flood, a printer in 18th century London, is approached with an unusual – one might say impossible – commission. He is tasked with printing an ‘infinite book’, a book that is ever-changing and never-ending. His quest to assemble the materials for his task leads him to the grim depths of eastern Europe and the castle of his menacing patron, then to further adventures around the world, through deepest dungeons and over the high seas. The story straddles the line between the realms of history and fantasy, weaving back and forth as Flood approaches his goal. For a reader who loves books, the protagonist’s quest embodies all that books represent: a myriad of other words into which we can, sometimes literally, lose ourselves.

The Historian by Elizabeth Kostova

Told in a skillful and spellbinding style that weaves through three generations, The Historian draws the reader into a world of books that simmers with tension. A chance discovery of a letter which begins with ‘my dear and unfortunate successor…’ leads a young woman on a search to uncover the secret of her father’s research and its connection to her mother’s mysterious fate. Yet she soon learns that a lurking, faceless menace has taken an interest in her investigation, just as it had her father, and that it is willing to kill to guard its secrets. The Historian visits some of the greatest libraries in the world, both real and imagined, including the collection of the story’s own malevolent protagonist, Dracula.

The Shadow Of The Wind (The Cemetery of Forgotten Books #1)

I cannot conceive of a more compelling title for a bibliophile than The Cemetery of Forgotten Books, and Zafón does not disappoint. Set against the backdrop of fascist Spain, The Shadow Of The Wind follows the perilous adventures of young Daniel Sempere, from his first visit to the cavernous and labyrinthine Cemetery of Forgotten Books to the ultimate resolution of the mystery that surrounds the tome he discovered there. For The Shadow Of The Wind, a novel by the enigmatic author Julián Carax, is no ordinary book. It is a dangerous thing to possess, for Daniel learns that someone has been seeking out all of Carax’s works, only to destroy them, and he has unwittingly become this menacing figure’s next victim. Dark, elaborate, and unfailingly gripping, Zafón has crafted a thriller that is at the same time a paean to literature itself and an ode to the wonder and danger of books.

The Name of The Wind by Patrick Rothfuss 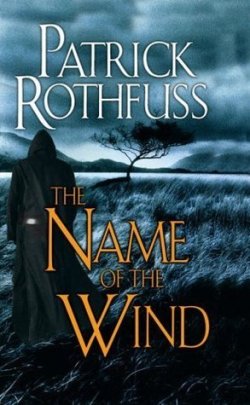 Unlike some of the other titles on this list, The Name Of The Wind is not specifically about books, but I include it here because it does, as evidenced by Rothfuss’s reverent treatment of books, fit with the overall bibliophilic aesthetic. While not central to the plot, the bibliophile will note how Kvothe, the story’s first-person narrator, receives a single book as a parting gift from his tutor, and how that book becomes a cherished possession, even a talisman, through his future trials. Those adventures eventually lead him to the monolithic library of The University, where factions of librarians clash over rivalling record-keeping systems, and the secret of Kvothe’s parents’ murder lies hidden in parchment and ink. The Name Of The Wind is among my favorite books for a host of reasons – the depiction of books within it is just one of them.

The title alone beckons to the bibliophile, not unlike a fine woodcut bookplate pasted to the inside cover of some handsome volume. I must confess this is the only book on this list that I have not personally read, but I was recommended it by a bookseller at the Antiquarian Book Fair, so I mean to remedy that particular deficiency soon. But based on the synopsis, its inclusion herein is apt. To quote, “A cryptic summons to a remote country house launches Isaac Inchbold, a London bookseller and antiquarian, on an odyssey through seventeenth-century Europe. Charged with the task of restoring a magnificent library destroyed by the war, Inchbold moves between Prague and the Tower Bridge in London, his fortunes—and his life—hanging on his ability to recover a missing manuscript.” Reading that, I wonder not whether I should read this book, but instead how is it I have not already.

The Eyre Affair by Jasper Fforde

For a lighthearted change from the stuffy and serious tomes mentioned above, I present for your amusement and delight The Eyre Affair, in which Victorian authors are elevated to Kardashian levels of celebrity, where whole government departments are devoted to the investigation and prosecution of literary crimes (such as the theft of the original manuscript of Martin Chuzzlewit), and where dodos are perfectly reasonable alternatives as household pets. Our heroine, Litera-Tec Thursday Next, finds herself in harm’s way as she strives to capture quasi-demonic mass-murderer villain Acheron Hades, whose sole purpose in life is to be as evil as possible, and rich if he can squeeze it in.  The Eyre Affair is a self-aware literary send-up that fans of both Thomas Hardy and Douglas Adams will find to be good fun.

So, what did I miss? Which books have you read that you think deserve to be added to this list? Let me know in the comments – as you can imagine, I want to read them! And if you’ve found this post interesting or helpful, please consider liking it or following my blog, or ideally, both! Thank you!