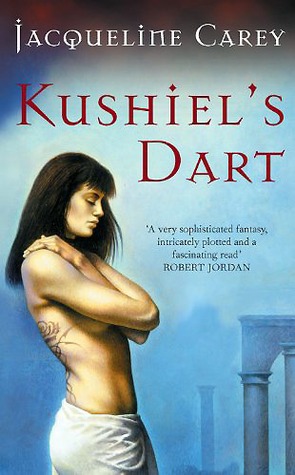 It took me a long time to work my way through this book, for several reasons. The first, and least important, is that it is a brick. Weighing in at a whopping 1,015 pages (yes, that’s a comma in that number), this book is no breezy, book-club volume. It’s a commitment. Like buying a turtle.

The second (and only marginally more significant) reason was that I was binge-watching six seasons of Game of Thrones with my wife, who at the time was a GoT virgin. (Well, not a literal GoT virgin, because we all know what happens to them.) But that meant for every vicarious Red Wedding thrill I experienced through my wife, the adventures of Kushiel’s Dart‘s protagonist, Phèdre, went neglected. No fault to her there.

But the final, and most important reason, for anyone reading this, was that I found Kushiel’s Dart to be particularly disengaging. Here’s why.

First: World Building. The scantily (read as: ‘not at all’) disguised emulation of medieval Europe was so thin that it hardly warranted differentiation at all. I found this mildly irritating, though at the time I couldn’t quantify why that might be. Other authors have masqueraded Europe as a fantasy realm in the past, after all, most notably Guy Gavriel Kay. But where Kay goes to great lengths to adopt only the bare framework of an historical time or culture, upon which he weaves a bright new society of his own imagining, Carey simply swapped out names and called her work done. France became Terre d’Ange. England became Alba. The story of Elua and his Companions, while modified to knit with Carey’s story and spiritually very different from Christianity, can still be broadly equated with Jesus and his Disciples. All this struck me as lazy worldbuilding, something that I, as an avowed proponent of Tolkien, had trouble overlooking.

Sex and sexuality are an intrinsic element of the book, especially considering that the protagonist herself is a divinely-inspired adept of the god of bondage, discipline and sadomasochism.

Admittedly, this first objection is a niggling point. Many a sin can be forgiven if the story justifies it, and surely somewhere in those thousand-plus pages I could find cause for redemption. And so I soldiered on.

Carey’s style I found difficult to fall into, to become engaged with. She very much ‘tells’ and does little to ‘show’, and though this writer’s adage can of course be violated in any number of creative and justified ways, in this case it rather proves the rule instead. Laying the blame for this at the foot of the first-person narrator is no excuse. There is an author behind that narrator, and it is the author’s job to move the story along and sweep the reader with it. Not so here. Events unfold at a plodding pace, related in the dry voice of a history professor who was awarded tenure on the merits of her research alone.

Early on in the narrative Phèdre reveals herself to be a hopeless ‘Mary-Sue’, utterly incapable of failure. Her miraculous abilities move characters and nations with equal ease and without protest, giving the story a highly ‘railroaded’ feel. (This is a term I adopted back in my days as a Dungeons & Dragons DM, which I used to describe a storyline that moved in such a rigid path that it felt as though it were on rails. If you’ve ever met Dungeons & Dragons players, you likely know why such a plot structure is sometimes necessary. But in the context of a novel, consider it a bad thing.)

Now, I will say that this book came highly recommended to me by a friend, whose literary advice I then (and still!) highly valued, and that recommendation came largely due to an aspect of the story that cannot go unmentioned: sex. Sex and sexuality are an intrinsic element of the book, especially considering that the protagonist herself is a divinely-inspired adept of the god of bondage, discipline and sadomasochism. And while the element of titillation might be enough to spur some curious readers to pick up this weighty volume, it is not what I would characterize as erotica. It is a fantasy adventure first and foremost, in which there are numerous sexually-charged scenes. I do not slight it for that. Rather the shortcoming of the sex scenes was in the parchment-thin characters who participated in them. Carey failed to make me care about any of them, and so without any emotional attachment, their ‘romantic’ encounters (read as: B&D sessions) left me unfulfilled. It is said, after all, that the mind is the body’s largest sexual organ, and to this I would add that it is the only one that can be stimulated by a book.

The political machinations that underlay the story seemed hollow and contrived to me, populated by countless irrelevant characters, each one flat and almost indistinguishable. The villain, Melisandre, carried no real weight or importance of her own, only that which Phèdre told me she had. Doing so was as effective at conveying menace as saying a stoked blacksmith’s forge is hot. Yes, it is technically true, but I still have my eyebrows. ‘Show don’t Tell’ strikes again.

The only memorable element of the book for me was the mysterious character of ‘The Master of the Strait,’ the mystical sea-lord who controls all passage over the English – sorry, Alban – Channel. This part of the story struck me as clever and original, if somewhat incongruous within the larger context. I would have liked to delve further into the Master’s backstory, but alas in this too I was to be disappointed.

In all I would deem Kushiel’s Dart a middling work of fantasy, with enough action and intrigue to sustain itself through its many, many pages, but at the end, its… I’m dying to make a one-night-stand analogy here, something about a rush of excitement and energy that is ultimately shallow and unfulfilling, but it doesn’t fit. A one-night-stand is over in an instant, which cannot be said of Kushiel’s Dart. Its more like an extra-marital love affair, one that begins with heart-racing promise but before long devolves into just the sort of relationship it was meant to be an escape from. And as for Phèdre herself? I am content to let her continue on her adventures. In the end I have concluded she’s not my type.